“There it is.” BMW chief designer Adrian van Hooydonk is standing on stage near the 2011 BMW 5-series, looking self-confident. He believes that this time around BMW won't disappoint the aficionados. "I believe that we achieved the perfect business sedan, a tailored suit," says the Dutch designer, the longtime number two to departed design head Chris Bangle.

Indeed, you can take comfort in the fact that the 2011 BMW 5-series looks like the latest 7-series, but it is more tight, dynamic, and alert. The oversized kidney grille is there, and so is the hard cut on the side, giving the 5-series a wedge shape. The famous and much-copied Hofmeister kink is more pronounced than ever.

The new 5 does a nice job of masking its size and mass—after all, the wheelbase has grown by three inches and total length by 1.5 inches. Compared with its predecessor, the excessive self-confidence is gone; the new car looks more sleek and, to be blunt, less nonsensical. Plus, to quote van Hooydonk once more: "The 5-series is designed to express autobahn speed even when standing still."

Cabin Is Tight but Magnificent

Technology is everywhere, from the cockpit to the ever present electronic assistance. Turned toward the driver, the center console is sporty, but the transmission shifter and the iDrive controller are taken directly from the 7-series. The cockpit looks tight because it is. The driver is cradled like a baseball in a mitt, and you need to have some familiarity with BMW ergonomics to get really comfortable. But the visual quality has improved significantly. The attention to detail is surprising, and the overall look is similar to the big brother 7's.

Driving dynamics are where BMW shines most brightly, and the fact that the company has achieved further improvement commands respect. We drove the 535i and the 530d, both equipped with silky-smooth, 3.0-liter inline-six engines. (We’ll get a crack at the 550i, with its 400-hp twin-turbo V-8, at a later date.) The new single-turbo, direct-injection gas six—which debuted in the 2010 5-series GT and replaces the old 535i's twin-turbo six—makes 300 hp at 5800 rpm and 300 lb-ft of torque at 1200 rpm. BMW says 0 to 62 mph takes 6.0 seconds. Given that we’ve clocked the previous-gen 535i at 5.2 seconds for the 0-to-60 sprint, it shouldn't be difficult to better that estimate. However, the new model's expected greater bulk should add a couple tenths to the old car's time, putting the run to 60 mph in the mid fives. (This assumes BMW’s power ratings for the old engine were accurate. Scuttlebutt says its output was significantly underreported.) Top speed is governed at 155 mph. The ZF-sourced eight-speed automatic shifts smoothly and plays a major role in reducing fuel consumption to an impressive 28 mpg in the European cycle.

Expect U.S. figures to roughly match the last gen’s city/highway ratings of 17/26 mpg. Good luck, however, actually achieving those figures yourself. You need to muster all sorts of restraint to even come close. A six-speed manual is still available. The engine is virtually inaudible almost all the time, but a purposeful squeeze of the throttle produces the sweet sound you would expect from a Munich-built inline-six.

The other engine we drove was the 242-hp, diesel-powered 530d. We wish it were coming to the U.S., because it does everything as well as the 535i but—in the real world—uses about half the fuel. Top speed is limited at 155 mph, too, and on the way there, the engine emits a reassuring, subdued growl. Europe will get the benefit of a four-cylinder diesel in the 520d, with an engine stop/start system and fuel economy of 47 mpg in the European cycle, which—its being a diesel—is a realistic figure. We like the underlying message of the 520d, which is that it's cute to drive a Prius or Insight but really completely unnecessary if big mileage is your objective.

Three Engines, as Before

Alas, we likely won't get any of the three diesel models in the U.S. (besides the 520d and 530d, there is a 198-hp 525d that uses the 3.0-liter engine). We will, as before, be offered a gas-only, three-engine lineup in non-M cars. The entry-level 5-series again will be the 528i, now with a 240-hp version of the naturally aspirated inline-six; direct injection will give it slightly more torque at low rpm, too. Europe also gets a 523i. The top-of-the-line model will for now be the 400-hp 550i, with a twin-turbocharged, 4.4-liter V-8. It's a thirsty engine when pushed, but it should offer big-time performance. In between the two models is the 535i we mentioned earlier. Later, BMW will have an M5 with a powertrain most likely based on the 550i engine. We can sample the powerplant in the X5 M and X6 M today, and given the lighter weight of the 5-series and a likely higher state of tune, it should deliver performance very much on par with the Cadillac CTS-V, Mercedes-Benz E63 AMG, and Europe-only Audi RS 6.

We drove the 5-series on the Estoril racetrack in Portugal and can attest to improvements over the predecessor. The rear wheels steer up to 2.5 degrees, which helps in high-speed corners. The stability control systems are efficient and transparent. Unlike other cars, which try to teach you a lesson by slamming on the brakes and bringing you down to what their computers perceive to be your appropriate speed, the 5-series seems to have nothing in mind but the elevation of your driving pleasure. Typically, when there is a correction, it's as soft as possible, and you can reapply power instantly—you're on the way to the next corner before you can think about it. The chassis is optionally adjustable to one of four settings: comfort, which delivers noticeable and un-BMW-like softness; normal, which works well for daily driving and long-distance journeys; sport, which allows the 5-series to flex its muscles with sharpened steering, later shifts, and more aggressive throttle response; and sport plus, which loosens the stability-control reins to allow some drifting.

Layer after Layer of Nannies—Just Check the Boxes

The adjustable settings work well, and they’re just one example of the many electronic assistance systems available in the 5-series. Scan the options list, and you'll see just about everything an engineer could dream up to relieve you of the chore of driving: adaptive cruise control with a stop-and-go function, a collision-warning system, adaptive lighting, lane-departure warning, parking assist, and a 360-degree view system. We are impressed but would like to submit that putting functional layers between driver and car wasn’t something BMW tried to be good at in the past. The 2011 5-series is also about 100 pounds heavier than its predecessor, which BMW justifies as a result of tightening crash requirements. The predecessor's aluminum front end is gone. "Our suppliers came up with lighter, stronger, and less costly steel grades," says project leader Josef Wüst.

Even given all the electronic nannies, the new 5 has us convinced. It's luxurious, stylish, and fantastic to drive. The car's main competitors are, naturally, the Mercedes-Benz E-class and the Audi A6. The Benz is a softer luxo cruiser in comparison, and the Audi is more parallel in mission. (A new A6 launches next year—the current car toppled the 535i in a recent comparison test, so we're already anxious to pit this new 5 against that new A6.) Pricing for the U.S. has not been announced, but figure on a modest increase over the current 535i, which starts at $52,125. 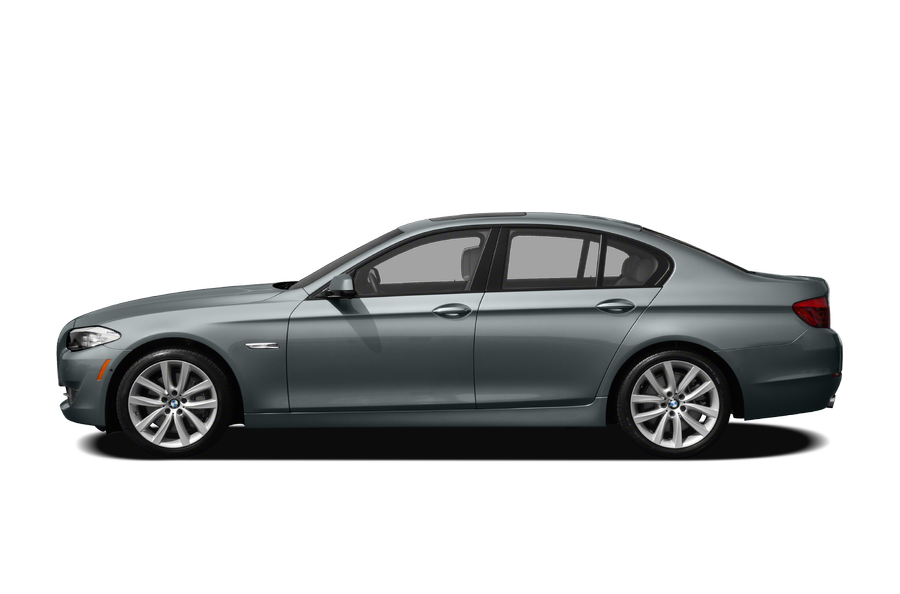 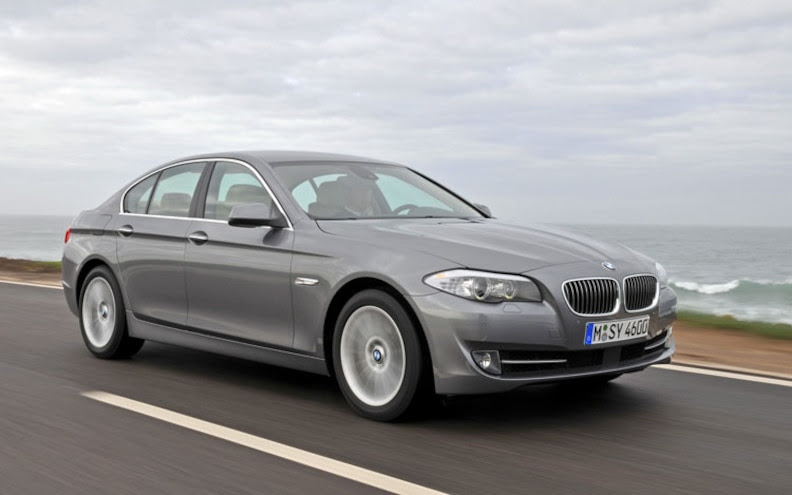 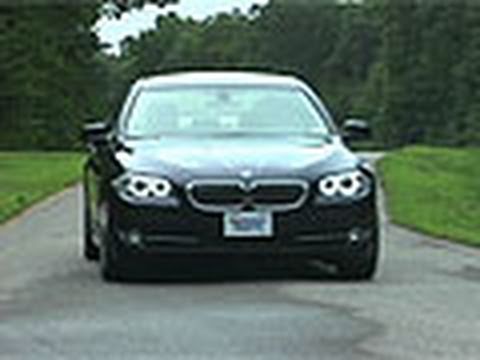 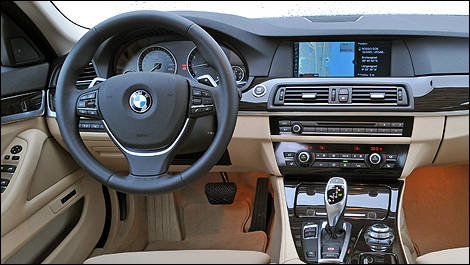 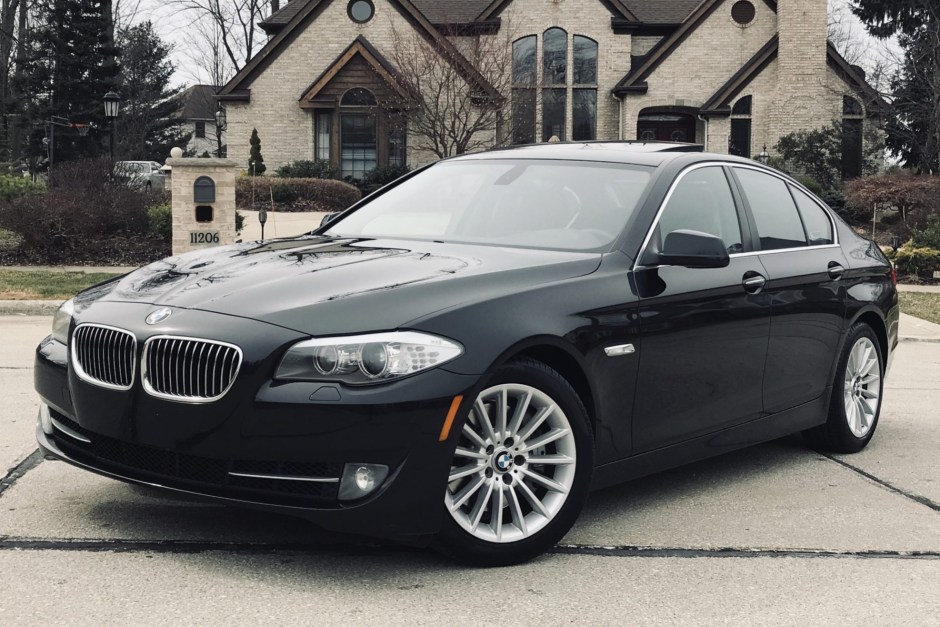 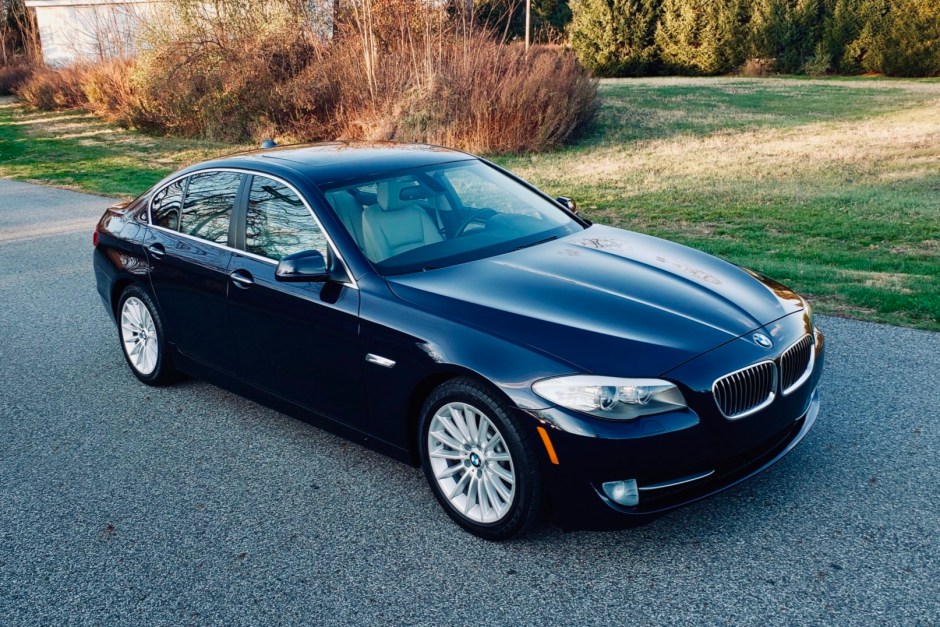 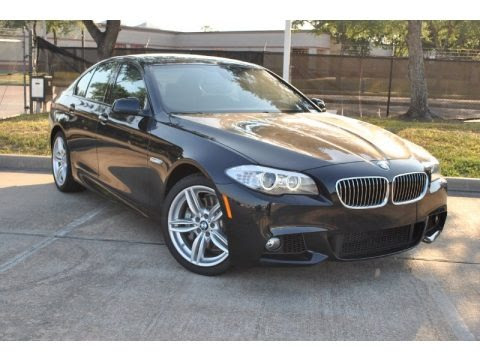 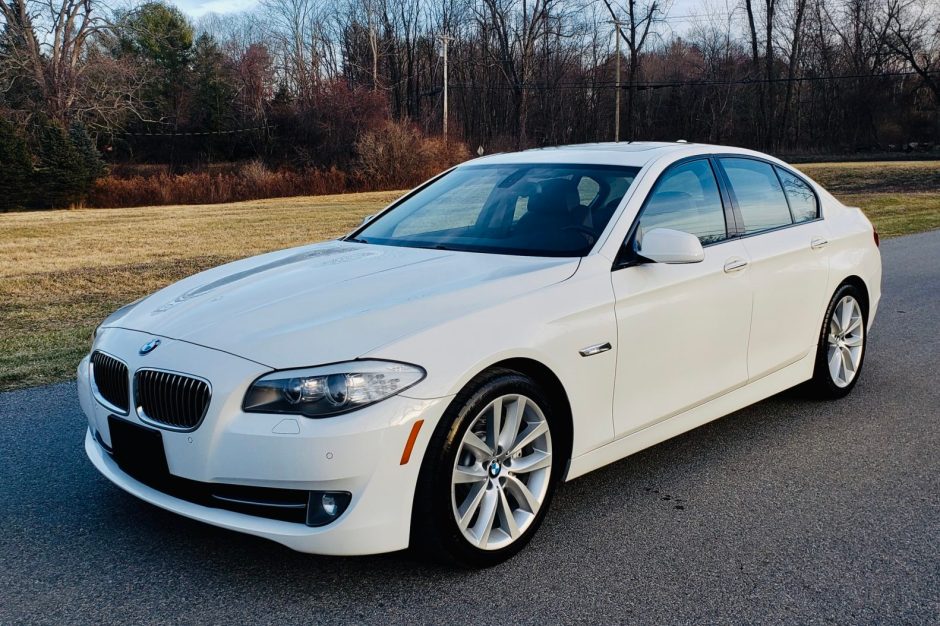 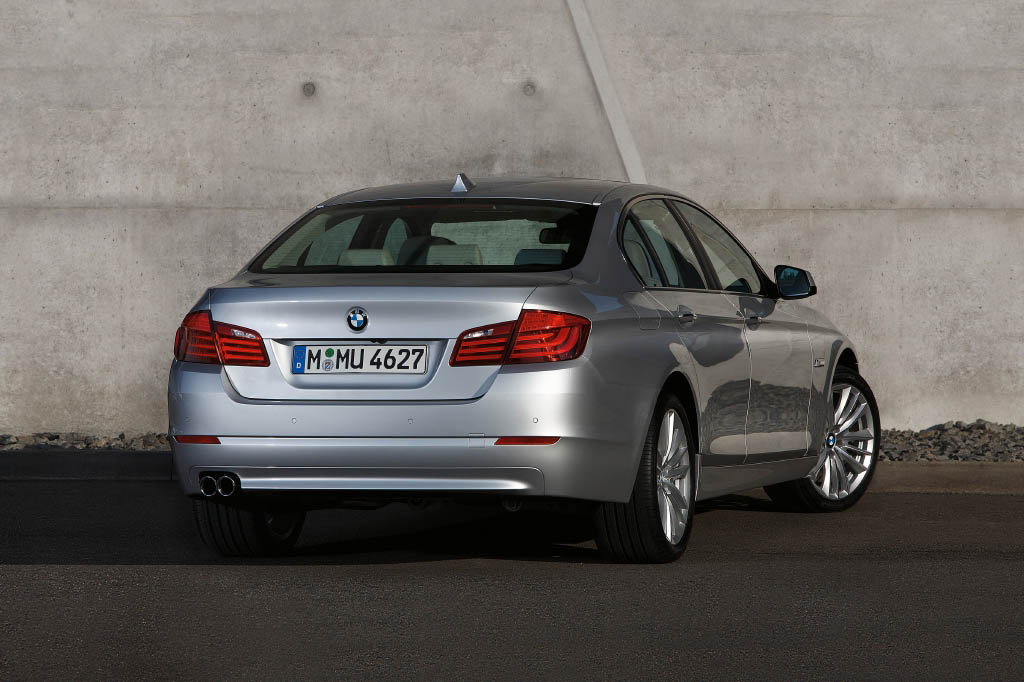 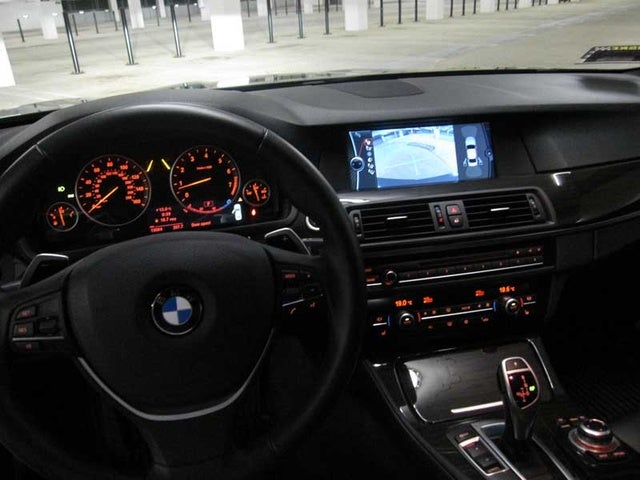